Blackfen was transformed dramatically in the 1930s into a residential and shopping district but until then it was a tiny hamlet on the Eltham to Bexley road, surrounded by woods and farmland. Its name describes the dark marshy ground of the area. This walk describes features from various times in its history.

Start the walk at Merino Place, Blackfen Road, standing opposite Penshurst Avenue. On the site of these 1950s flats were four dwellings (a pair of two-storey and a pair of one-storey) built in 1819. Collectively known as Merino Place, they were built by John Johnston of Danson to house workers on his estate. Surrounding them was agricultural land and opposite a footpath led south through the fields to Halfway Street.

Walk west, towards central Blackfen. Gwillim Close remembers T. W. Gwillim who bought the land here after the Danson estate was sold in 1922; previously a market garden called ‘The Strawberry Gardens’ was kept here. The shops on the right, Wellington Parade, were built from 1934, serving the needs of the growing local population. The shops on the opposite side of the road, Blackfen Parade, were built from 1938 and include the library which moved here in 2005. 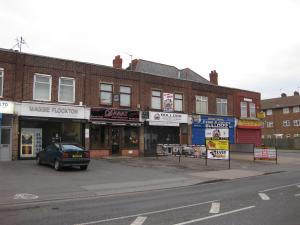 The roof of a house that Mr Gwillim built on his land can still be seen, incorporated into the shops of Wellington Parade, 2010 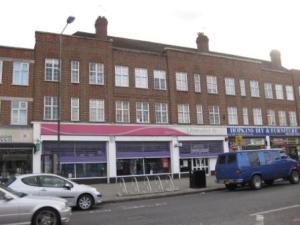 At the crossroads, the heart of modern Blackfen, turn right into Westwood Lane which until the 1930s was just a dirt track. Walk as far as the Co-op car park, the slope of which follows the shape of the auditorium of the Plaza cinema (later Odeon) which stood here from 1937 until 1956. The building stood derelict until it was demolished in 1962 and a Safeway supermarket was built.

Cross to the other side of Westwood Lane. The flats here, Woodman House, were built in 2011 on the site of a former petrol station. The shops of Woodman Parade were originally intended to extend southwards as far as the pub. Looking north, the A2 flyover can be seen; it was constructed in 1969 when the 1926 Rochester Way was widened. The original level of Westwood Lane can be seen in the footpath next to the shops of Woodman Parade.

Walk south now to the pub, originally called The Woodman but since 2008 called The George Staples. Designed in 1931 by Kenneth Dalgleish, the pub was made to look considerably older than it was by giving it the appearance that it had been extended several times. It was built to the rear of the earlier pub, allowing business to continue uninterrupted. The first Woodman Inn was built in 1845 by George Staples, a wood merchant by trade.

Cross the traffic lights to the south side of Blackfen Road. This terrace of shops was the first in central Blackfen, opening in 1931 as the RACS Co-operative Stores. Walk along to the junction of Days Lane/Blackfen Road. This spot has long been the heart of Blackfen. Imagine standing here in the early 1900s: surrounded by farmland, the old Woodman Inn stood on a quiet country road with the tree-lined Days Lane turning off towards Halfway Street. (Wellington Avenue was not constructed until the 1930s). Next to the pub stood a row of mid-19th century cottages and a tea room called “Cyclists’ Rest”.

Walk along Days Lane now. Blackfen saw dramatic change in the early 1930s; until then, on your left (as the road bends to the left) were the barns of a farm and at the corner with Burnt Oak Lane was the farmhouse. Turn left now until you get to Our Lady of the Rosary Roman Catholic Church (reached by a driveway) which opened in 1937 and was in demand as Irishmen came to the district to find work at a time of rapid house-building.

Retrace your steps to Days Lane and cross over the road to the Baptist Church. The Baptists have been meeting on this site since 1932, progressing over time from open air, to a tent, to various-sized halls, until the present church building opened in 1966.

Now turn into Lime Grove. Here stood Queenswood House, a substantial residence in grounds which had formerly been a farm. Residents included Sir John Kirkland, army agent and Brig.-Gen. Sir Charles Martel, Chief Superintendent, Ordnance Factories, Royal Arsenal Woolwich. Both Queenswood and the farm on the opposite side of Days Lane were bought up by C. R. Leech for 1930s housing development. Leech built houses of various shapes and sizes to cater for different levels of affordability. 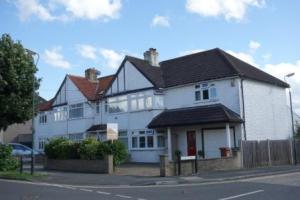 Houses built by C. R. Leech on the site of Queenswood House, 2014

Turn left into Harman Drive, constructed in 1966, and on reaching Fen Grove turn right as far as Holbeach Gardens. Individually-built houses appeared in the area of Fen Grove and Queenswood Road in the 1920s. The cottage on the corner, Windy Ridge, was built in 1921 but at the time it was not decided where the road would be and so it ended up being the wrong way round, with the front entrance in the back garden. 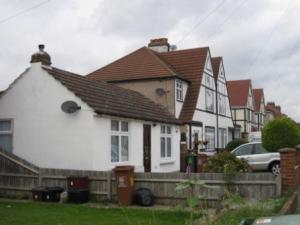 Retrace your steps south along Fen Grove until it meets the River Shuttle, which flows east through Holly Oak Wood Park; proceed along Berwick Crescent, where the house-builder, Wates, incorporated the stream and trees into the 1935 design for a rural feel.

Just as the road bears left, turn right into the footpath to Parish Wood. Only a small section of ancient woodland remains and the nature of the ‘fenland’ is apparent here, with water-loving trees such as crack willow and alder growing. Take the footpath branching right, past the pond, and at the playground take the right path again, through the gates and continue along Parish Gate Drive which follows the line of the old parish/county border and present borough boundary. Cross over to the north side of Blackfen Road where a 1903 boundary marker can be seen against the brick wall. 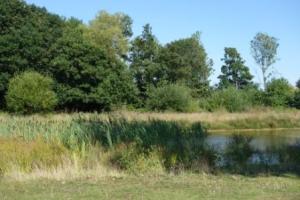 Walk east along Blackfen Road. The parade of shops is the earliest in the Blackfen district, serving the residents of the Boundary Road estate which was built from 1927. Further along, the Jolly Fenman pub opened in 1957 and in the 1980s had its own brewery, serving Blackfen Bitter and Fenman Fortune. 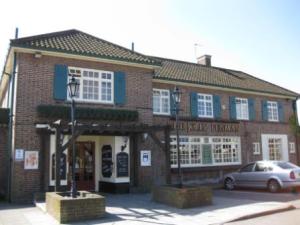 At the corner with Fen Grove, 110 Blackfen Road was where Miss Reynolds opened a general store in 1925 and post office in 1927; it was rebuilt in 1947 after bomb damage. Further along at 116 was a tea room with tables and chairs outside, providing refreshments for the families camping on their newly-acquired plots in the 1920s while they built their own cottages; in the 1960s this became Corbett’s timber merchant and is now Kitchen Concept. 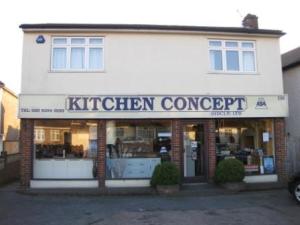 Opposite Leechcroft Avenue, which the house-builder C. R. Leech named after himself, a Sunday School began in a tent, replaced by a tin hut in 1939. The congregation was so large by 1967 that a new hall with its pyramid roof surmounted by a copper covered fleche was built and called the Church of the Good Shepherd.

Church of the Good Shepherd, Blackfen Road in 2010

The land to the north of here was the ancient West Wood but when the value of timber fell the trees were cleared in the 1860s for farmland instead.  On the corner of Burleigh Avenue stand Westwood Farm Cottages which were built in 1890 to house workers on Westwood Farm. Footpaths and streams crossed the landscape. In time, the land became more valuable for housing and it was sold off in 1930.

Continue along Blackfen Road. On the site of Premier’s Test Centre stood the entrance lodge to Queenswood House. The two-bedroomed bungalow in which workers on the estate lived was later used as offices and survived until the 1950s.

Blackfen shops have come and gone but some have stood the test of time. Homepride Builders Merchant (no 224) opened in 1932, just as people began to own their houses for the first time.

At 241 Blackfen Road, now Fenways Car Sales, was from 1939 a large greengrocers called Jackson’s. A public hall was built behind it serving as a club house and meeting place. Previously on this site was a five-bedroomed house called Woodlands which had a substantial entrance porch with four steps leading up to it. 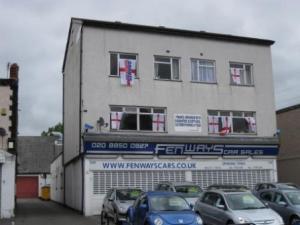 There has been a bakery on the site of J. Ayre (no 238) since 1932 and the smell of the bread has enticed customers ever since. The business was bought by the Ayre family in 1949 and has survived the coming of the supermarket by adapting to its customers’ changing needs. 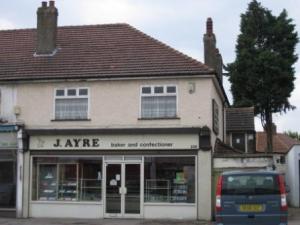 As we return to central Blackfen, on the left is Gloucester Parade which was built in 1938/39, providing more shop space to serve the local community which was growing so rapidly at that time. 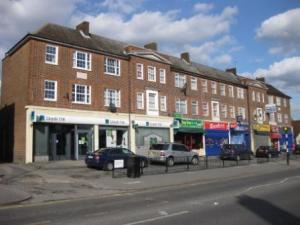 We conclude our walk back at the George Staples pub, where you are welcome to take part in an ‘armchair guided walk’ beer. Cheers!

I have given a number of ‘real’ guided walks around Blackfen – if you are interested in joining one in the future, please contact me.