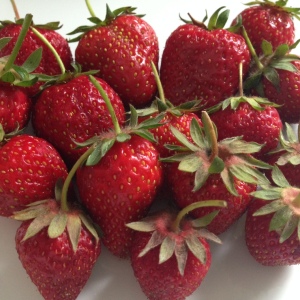 Blackfen homegrown strawberries! Does anyone else grow strawberries in their garden? Blackfen has a tradition of growing them. James Lee grew them at ‘Strawberry Gardens’ (where Gwillim Close is now) until he went bankrupt in 1906 after bad crops due to 3 years of wet weather. Blackfen Farm also had a strawberry field where RACS Stores (now Katie’s Playpen, a chemist and off-licence) was later built, and according to the farmer’s granddaughter, they were the juiciest she’d ever eaten.

Former RACS Stores which opened in 1931. Before that, the site of the strawberry field at Blackfen Farm