Once the Christmas excess is over [I say as I’m tucking into a Chocolate Orange!], will you start to think about New Year’s Resolutions? Perhaps you’re aiming to take up more exercise? 100 years ago cycling was very popular. Cycling clubs were established and the working class found freedom on their bikes in the countryside. Of course, stop-off points for refreshments were needed, and on the north of Blackfen Road opposite Days Lane stood the Cyclists’ Rest tea room and dining salon. In the photo below which has the RACS Stores and Days Lane on the left, you can just make out the sign for ‘Teas’ on the right hand side.

By the 1930s the residents of Blackfen cycled out of necessity rather than pleasure, as it was cheaper than paying for trains or trams. Garth Groombridge sold bicycles from his home at the Chapel House. In Blackfen Road close to Sycamore Avenue, Alfred Lockyer had a shop selling bicycles and electrical goods, and opposite was Wrights’ radio, cycles and electrical. Charlie Ryan had a cycle shop at 21 Wellington Parade (later Argent’s, and in 1974 it became Garozzo; it is now Sondel Yamaha). Bicycles were also used in the 1930s for deliveries of newspapers and bread, and tricycles were used to sell ice-cream.

A Cycle Speedway was set up on a field next to Blackfen’s cinema in Westwood Lane around 1951. The Blackfen Wheelers Cycling Club was formed in 1952 and their club runs into Kent, Surrey, Sussex and Essex started at the Woodman Inn. But both had folded by the late 1950s.

And then of course cars came along…

Public houses are often the oldest surviving buildings. Someone recalling a walk from Danson Road to Avery Hill in 1913 said, “we walked along the Blackfen Road, which seemed to be in the heart of the country. There were fields on each side of the road where sheep were grazing and on the left we could see the countryside for quite a distance. Apart from a few small cottages, the only buildings we passed were two public houses, The Three Blackbirds and The Woodman”.

The Three Blackbirds was licensed as far back as 1717 (says Jim Packer in his book, Bexley Pubs) but was virtually rebuilt after a fire in the 1890s and has had later extensions.

The bus is going from Bexley to Piccadilly Circus. This route was not meant for local journeys but for excursions for Londoners into the countryside.

Southeastern has published a consultation document ‘Shaping the Future’. At 46 pages long you would be forgiven for missing the lines on page 23 which say: “There would be a limit to the improvements that could be made to the timetable without also reducing the number of central London stations served from certain locations at particular times. An example might be for all Metro services on the north Kent (between Dartford and
Charlton), Greenwich and Bexleyheath lines to terminate at Cannon Street only. We believe that the simplicity of a regular service to a single London terminal throughout the day would benefit both regular and occasional passengers.”
If you travel on the Bexleyheath line to Charing Cross or Victoria you would be advised to complete the online survey as a response to this consultation. The DOCUMENT is here: https://www.gov.uk/…/south-eastern-rail-franchise-public-co…. The SURVEY is here: http://www.smartsurvey.co.uk/s/QHQQM/

There is also an online petition https://petition.parliament.uk/petitions/190894 but the important thing is to complete the survey and make your feelings known.

In its proposal to ‘remodel’ the borough’s libraries (ie remove four libraries, including Blackfen, from its ‘core services’), Bexley Council states “A significant majority of the borough’s population – 98.5%- will live within 1.5 miles of a library, meaning most residents will live within a short journey of one of the six proposed Council libraries.”

How did the Council arrive at this figure?

I presume they have chosen the shortest distance ‘as the crow flies’ but Blackfen has several obstacles surrounding it: the A2 dual carriageway, the Sidcup railway line and Danson Park. These mean that actual distances between A to B are much further. A few Blackfen addresses tested in the AA Route Planner reveals: 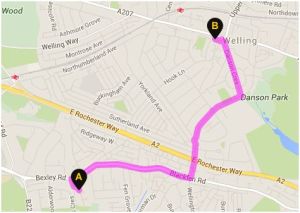 Travelling from Parish Gate Drive to Welling Library in the real world, according to AA Route Planner

Even taking into account pedestrian bridges and subways, for most people, walking from Blackfen to either Welling or Sidcup would be considered too far, especially for the types of people most likely to use the library. And there is the hill of Hook Lane to consider, which is not for the faint-hearted! Bexley Council states that 76.3% of Bexley residents have a car – but have any of the councillors tried parking in Sidcup during the daytime lately? Oh, and they’re about to increase the car parking charges too…

Luckily Blackfen is well-served by a 51 bus route. However, this is no use to children on class visits who can currently walk to the nearest library. The time factor means children won’t be able to pop into a library after school. Job seekers using the library computers might not be able to afford the bus fares required to access another library. And by forcing people to visit other town centres, they are less likely to use the shops in Blackfen which could have a detrimental effect on its high street and, in turn, make it a less desirable place to live, which is surely not in the Council’s best interests economically. Local facilities are a key factor in a community’s survival.