In 1933 the shop at 9 The Oval was a newsagent, bookseller, general and fancy stationer. It was also a lending library with music, and it sold toys and games.

According to the Sidcup and District Free Press, “The Bookshop at The Oval, Sidcup, caters for those who like early morning deliveries of the daily newspapers – also those who like the evening editions. There is a most excellent ‘No Subscription’ Lending Library at this Bookshop. Lovers of books have an opportunity there of obtaining real good reading matter. Special books, magazines, music and back numbers are delivered in less than 24 hours.”

This shop must’ve been a really useful one to the early residents of Blackfen and the Marlborough Park Estate, as the library (the old one in Cedar Avenue) was not built until 1937.

And it’s still a newsagent today! 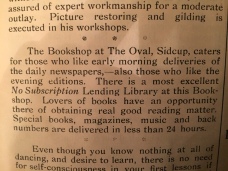 I’ve just acquired a 1933 ‘Sidcup and District Free Press’ which has a page of adverts for Blackfen. Here are R. E. West hardware stores, Woodlands Post Office and H. E. Rowbottom grocers in what was then called Woodlands Parade, opposite Sycamore Avenue. Plus in the house alongside, the rather fabulous Blackfen School of Music, Dancing and Elocution. The photo is 1934. And lastly, the same view today (2019). 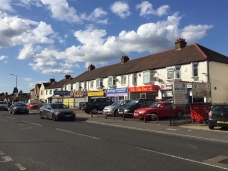 Here is Woodlands Parade in Blackfen Road in 1934 (Sycamore Avenue can just be seen on the left). The house just past the shops had been a private school since 1928, where Mr and Mrs Ashdown ran The Blackfen School of Music, Dancing and Elocution. As well as normal school lessons, there were dancing lessons on Saturday mornings and typing lessons in the evenings. The school was very successful, with regular displays and competitions. Apparently for boys it was THE place to go on Friday nights if you wanted to meet a girl!

In 1939 a First Aid Post was built on the triangular plot of land at the corner of Sherwood Park Avenue. Kent County Council had already planned to erect a Maternity and Welfare Clinic in the Blackfen area and so it was agreed that they could be permitted to use it as a clinic in Peace Time. Not far away a Cleansing Station and Ambulance Station was built at Willersley Park.

There were quite a few public shelters, including trenches underneath the gardens of The Oval for 316 people. I spoke to someone who remembered chasing his friends around the tunnels as a boy, but it seems no-one ever actually used them as a shelter during air raids. Like many shelters dug in the ‘Black Fen’, they frequently flooded!

During 1938/39 there was a real fear by the authorities that if war broke out, bombing raids would cause mass casualties. Trenches were dug in parks to protect the public if they were caught out in a raid and couldn’t get to their own shelters.

Trenches were dug at right angles to each other, with earth walls reinforced with sandbags and a corrugated iron roof covered with a layer of soil. The roof was raised about a foot above ground level. They were not particularly safe. A direct hit or even a nearby bomb would probably collapse the whole shelter. They were also very unpleasant – smelly, unsanitary and waterlogged.

By October 1939 there were public shelters built or planned at The Oval, Penhill Park, Marlborough Park, Holly Oak Park and Willersley Park. The shelter at The Oval was designed for 316 people, but it immediately flooded and extra drainage had to be constructed. However, it seems no-one ever actually used the shelter during air raids. In Blackfen, people tended to have gardens with Anderson shelters (or if not, Morrison shelters), so they were much less likely to have to use public shelters in parks, unlike in London where most people didn’t have gardens. And most shelters dug in the ‘Black Fen’ were never going to be much use as they were often flooded.

As always, vandalism was a problem. There was damage and thefts from trenches in Holly Oak Park on 5 and 6 February 1940. Tools were stolen by five boys who were caught and charged, appearing in court on 20 February.

Today there is no trace on the surface of the trenches at The Oval. The entrance, which would have been in between the two rectangle sections, was blocked up.

Thanks to the sunshine, we managed to finish weeding the pavement and painting the railings at Woodman Parade, Westwood Lane on 29 April. Well done to everyone involved over the last two weeks. And thanks to the ice-cream van man and The Broken Drum for much-needed refreshments afterwards! 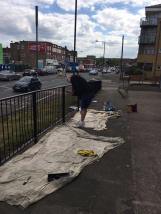 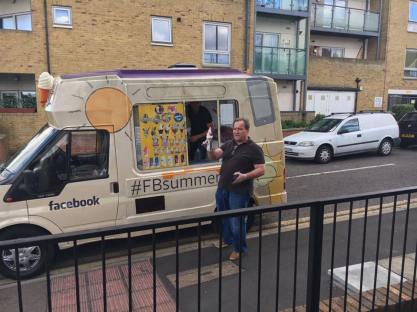 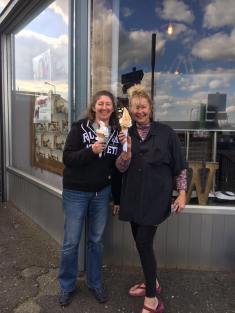 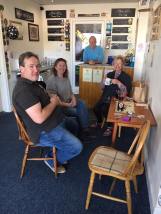 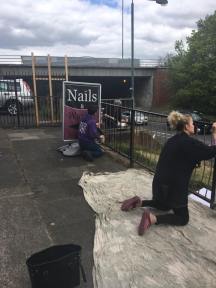 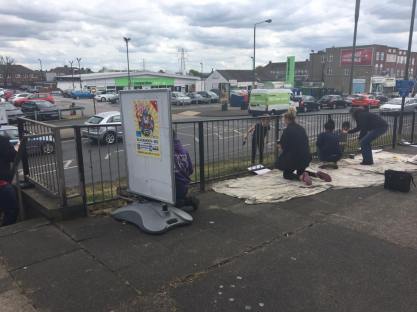 At 10am on Saturday 22 April a group of volunteers met to paint the railings and weed the pavement along Woodman Parade in Westwood Lane, Blackfen. We were joined by Rt Hon. James Brokenshire, MP and Councillors Louie French, Cafer Munur and Lynn Smith. Despite the rain (how unlucky!) we carried on and it has made such a difference in just a couple of hours.

Thank you to Raw Hair Salon for the tea/coffee and biscuits! We will return soon to continue the job. 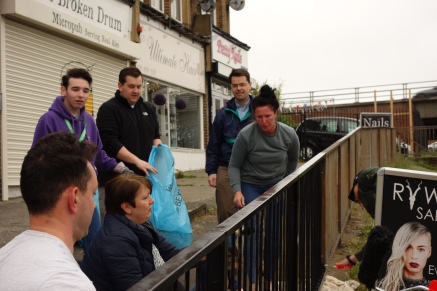 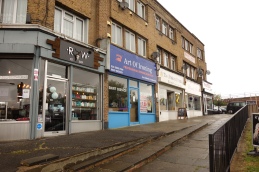 And happy 2nd birthday to The Broken Drum!

Blackfen Past and Present
Blog at WordPress.com.